The situation is serious. Take it seriously. Since German unification, no, since the Second World War, there has been no challenge to our nation that has demanded such a degree of common and united action – Angela Merkel

Children are infected at rates that may be comparable to adults, with severity that’s much less, but that even within the kids, there’s a spectrum of illness and there’s a handful that require more aggressive therapy – Dr. Srinivas Murthy

We control the desire to be in public spaces by closing down public spaces. Italy is closing all of its restaurants. China is closing everything, and we are closing things now, too – Drew Harris

We now know more about who is at risk. Average age of death for people from coronavirus is 80. Average age of people who need medical attention is age 60. We want people who are older, people who have medical conditions, to take steps to protect themselves, including avoiding crowded spaces, including thinking very carefully about whether or not now is the time to get on that cruise ship, whether now is the time to take that long haul flight – Surgeon General Jerome Adams

Today we will take another step and proceed with a ban on gatherings above a certain number … unfortunately, and I say this with regret, the recommendation that we should all stay at home while upheld by a large part of the population is still not followed by all, and that is very dangerous. – Stelios Petsas

By comparing the available genome sequence data for known coronavirus strains, we can firmly determine that SARS-CoV-2 originated through natural processes – Kristian Andersen

Drawing from my own country’s experience, speedy and accurate testing and adequate personal protective equipment for medical professionals are most effective in preventing the spread of the virus – Jack MA

First, it can kill healthy adults in addition to elderly people with existing health problems. Second, Covid-19 is transmitted quite efficiently. The average infected person spreads the disease to two or three others — an exponential rate of increase. – Bill Gates

We’re not up against another army or another nation. But the enemy is right there: invisible, elusive, but it is making progress. – Emmanuel Macron 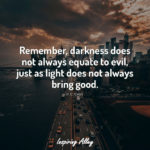 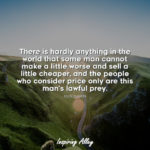 John Ruskin | There is hardly anything