Sacrifice is a part of life. Everyone goes through a time when they are bound to make sacrifices for the people they love. Sometimes, a sacrifice is desperately needed, for things to get better. There are times when we even have to give up on some of the most important people in our lives, but that’s just how life is. And life goes on.

Dreams do come true, if only we wish hard enough. You can have anything in life if you will sacrifice everything else for it.

declares J.M. Barrie. Usually, our dreams are satisfied without much effort. However, nothing good in life is achieved without a bit of struggle and sacrifice. Occasionally, we have to let go of some things, in the hope of getting better things in life. For instance, some dreams call for sacrifices. A dream of having a better life style means giving up a bit of current spending. According to J. C. Watts,

Truly, in order to make a sacrifice one needs to possess a very strong will. It requires a lot of effort and strength; which is why performing a sacrifice makes a person much stronger. Sacrifice can also be associated with an act of worshipping. Sacrifice means letting go of something or someone, who is near and dear to us. The extract above gives us a clear picture of the willpower it takes to forego something. The possession of money is not the only means of being wealthy. The genuine way by which one can be rich is by foregoing things in the way of those who need it. Having all the luxurious things in life improves our lifestyle, but giving up all those things makes our heart valuable. Henry Ward Beecher says

In this world it is not what we take up, but what we give up, that makes us rich.

Letting go of all negative thoughts and feelings is the greatest form of sacrifice. It makes a person more mature and benevolent, leading them to progress in life as Serj Tankian explains,

Forgiveness is the ultimate sacrifice. Eloquence belongs, to the conqueror. 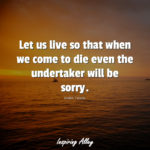 April 26 Quote of the day

5 Quotes To Help You Change Your Life